I find it much easier at the moment to post my sketches on Instagram, so please find me there if you are interested. I may revive this blog again at some point because I enjoy writing as well as drawing.

A quick sketch while on my bike doing an errand. Well, I did get off the bike for half an hour to do this drawing.

At Pallet Coffee Roasters in my neighbourhood.

This was drawn during a Vancouver Urban Sketchers meetup at the Convention Centre. The group I started in March 2013 is now over 4 years old and has 1917 members as of today! Yes, that is correct — nineteen hundred seventeen.

A video about my sketching technique by Opus Art Supplies

Opus Art Supplies asked me to demonstrate my urban sketching approach, specifically my panorama drawing technique. It was challenging for me to think about what it is I actually do when I draw, but I came up with something that I hope is helpful. Everyone has their own methods. I do know about traditional perspective drawing but I don’t tend to use those principles every often. Mostly I use the pen measuring method as shown here, but with the twist of holding it really close to my eye and sitting close to my subject — this is how I seem to get a bit of a fish eye effect that reflects closely what my eye sees. 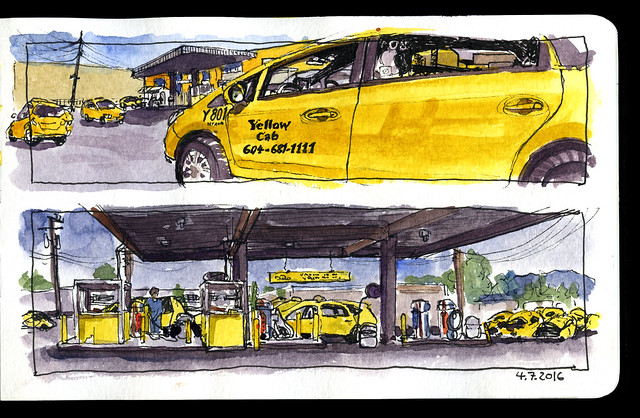 My sketching friend B. and I had a long-hedged plan to go and use up a lot of yellow paint, for the sheer fun of the colour. So we met at the Yellow Cab depot in Vancouver and politely asked for permission to draw there. The weather played along, and we cracked open the yellow paint.

We learned that the depot is also being rented out to food trucks, a car wash, and a repair shop. Various people involved in some of these other businesses, as well as cabbies, stopped to chat. It was thoroughly enjoyable. 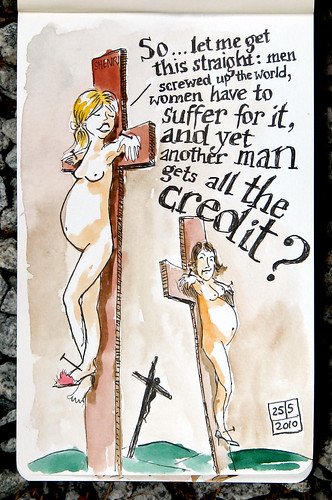 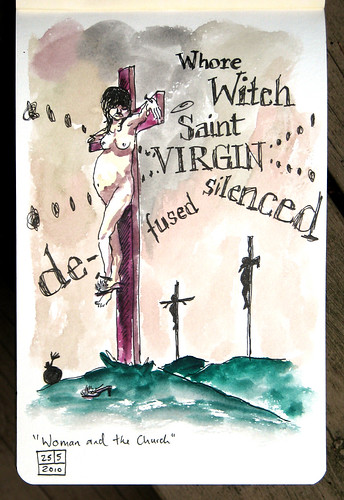 In early June, one of my Meetup group members had arranged for the the Montreal urban sketcher and watercolour artist Shari Blaukopf to host a watercolour workshop in Vancouver. This took place on June 5 and 6; there were 12 of us, we only had a little bit of drizzle, and Shari did a great job.

The rule for me is, I don’t get much done in a workshop. I am slow, especially if I have to absorb new information. So my hope is always that something has sunk in anyway. 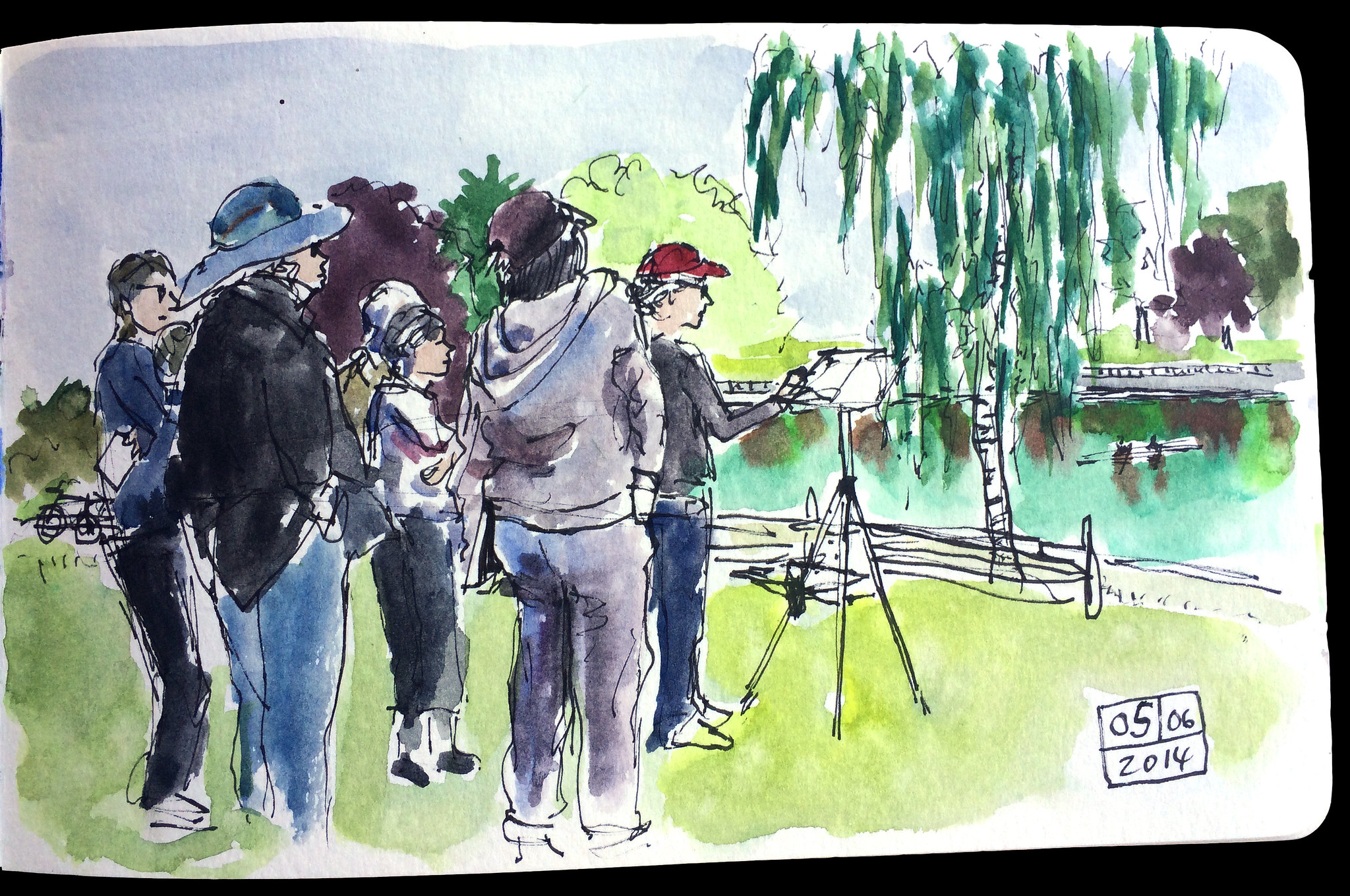 Here’s Shari doing her demo and leaving us in awe. 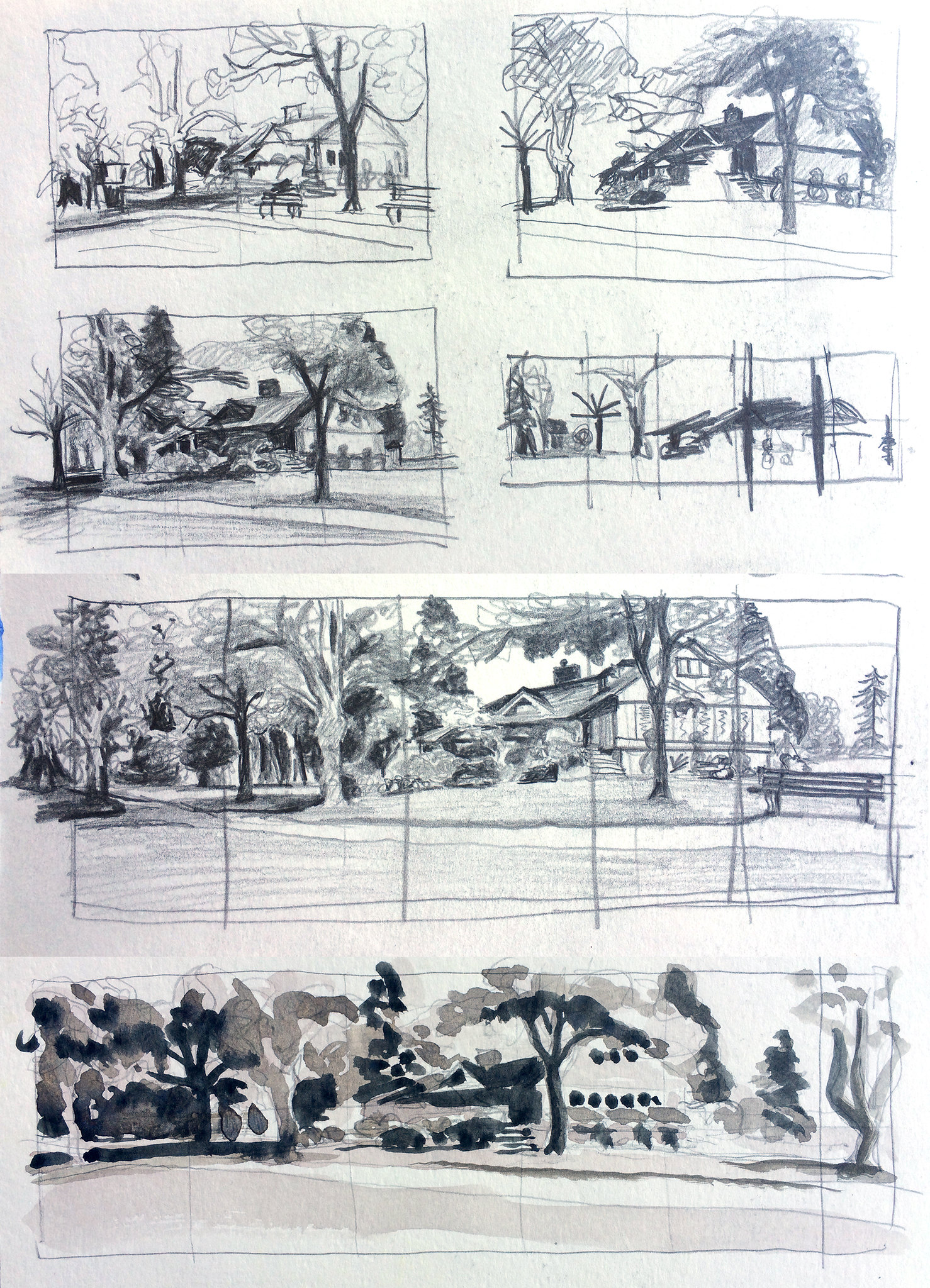 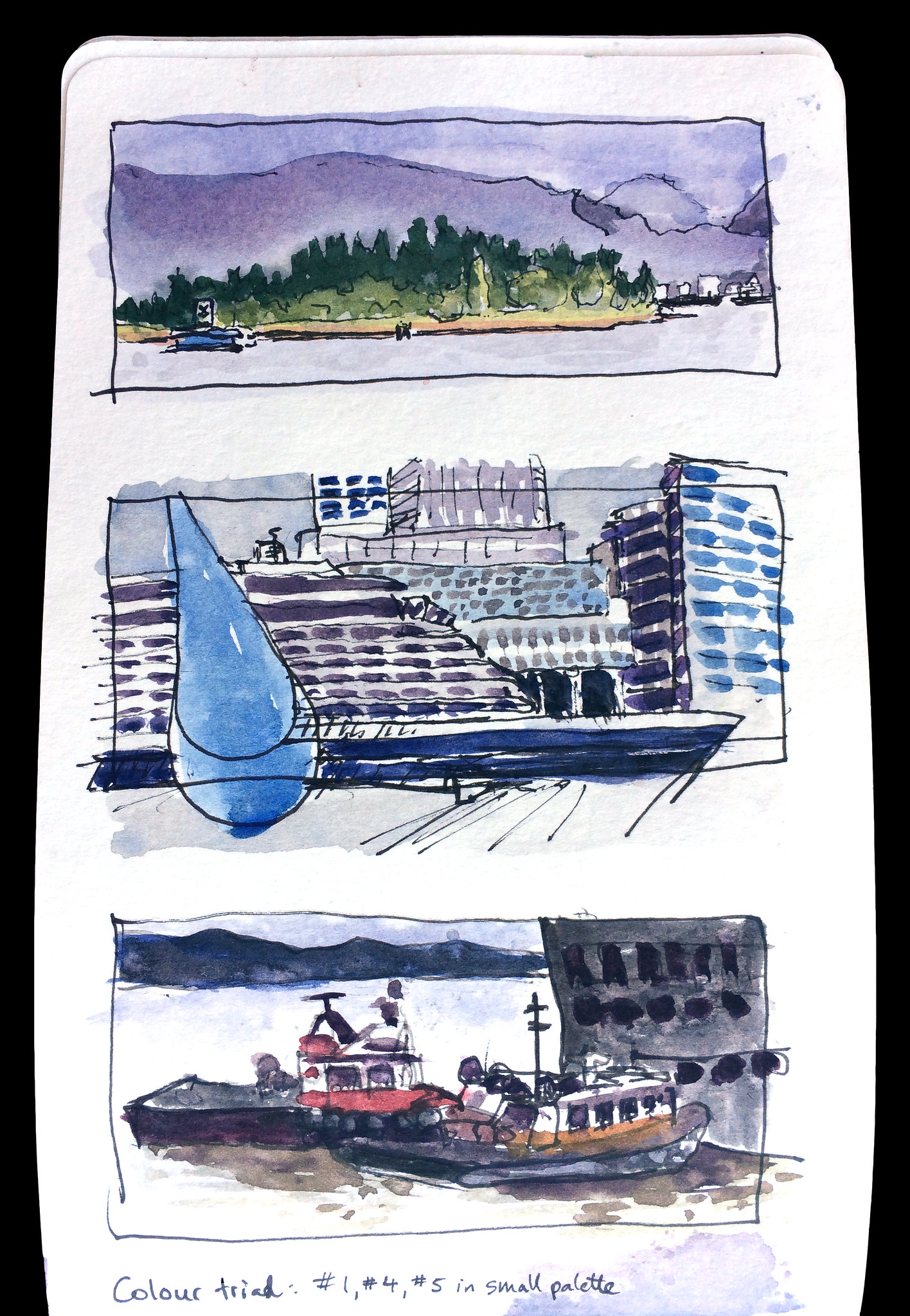 Practicing watercolour sketches with a palette restricted to only three colours.

Back in September, a fellow Vancouver urban sketcher, and old family friend, Bob, and I went out for a morning coffee to sketch, and then had sushi for lunch, to sketch. Seriously, we drew our lovely sushi plates for about 15 minutes, and only then did we eat. Looking at food and not eating it is pretty unheard of for me. But we did it, it was fun, I didn’t starve, and best of all, sushi doesn’t get cold if you wait, just iffy.

It’s been so long that I’ve posted to my blog, that I had to review how to do it.

I have no excuse not to post at the moment — I have a total lull in my workload. And I am currently visiting my parents in Maui; they are here for a month. I won’t be here that long, but happy to arrive here just as the rainy season hits Vancouver and while I seem to have a week off before a large scheduled project comes in.

This sketch is from October 19 (I’ve misdated it on the sketch). For the first time ever, I had set up a full-day sketch crawl for my Vancouver Urban Sketchers meetup group. I asked the sketchers to check in with me and each other any or all of three times: at 10 a.m., at 1 p.m., and at 5 p.m. This meant that in between I had lots of time to draw. For example, here I sat at a counter outside my favourite fish shack, “Go Fish”, just off Granville Island, and started this drawing while waiting for my food, and finished it afterwards. It took about 2 1/2 hrs to draw this complex scene.

Having forced myself to spend a full day drawing and socializing with other sketchers was wonderful. I knew my year-end business bookkeeping was waiting for me in the office, but it waited patiently while I drew.

Never delay drawing (or having fun). The work and chores will wait. And those things are seriously overrated anyway. 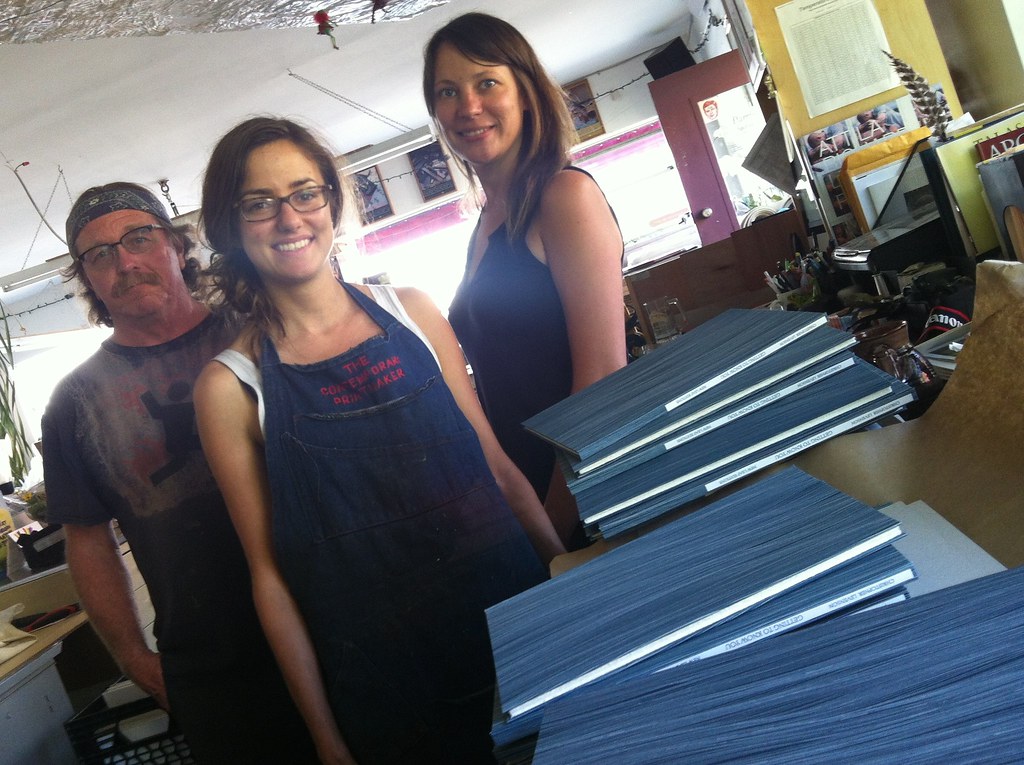 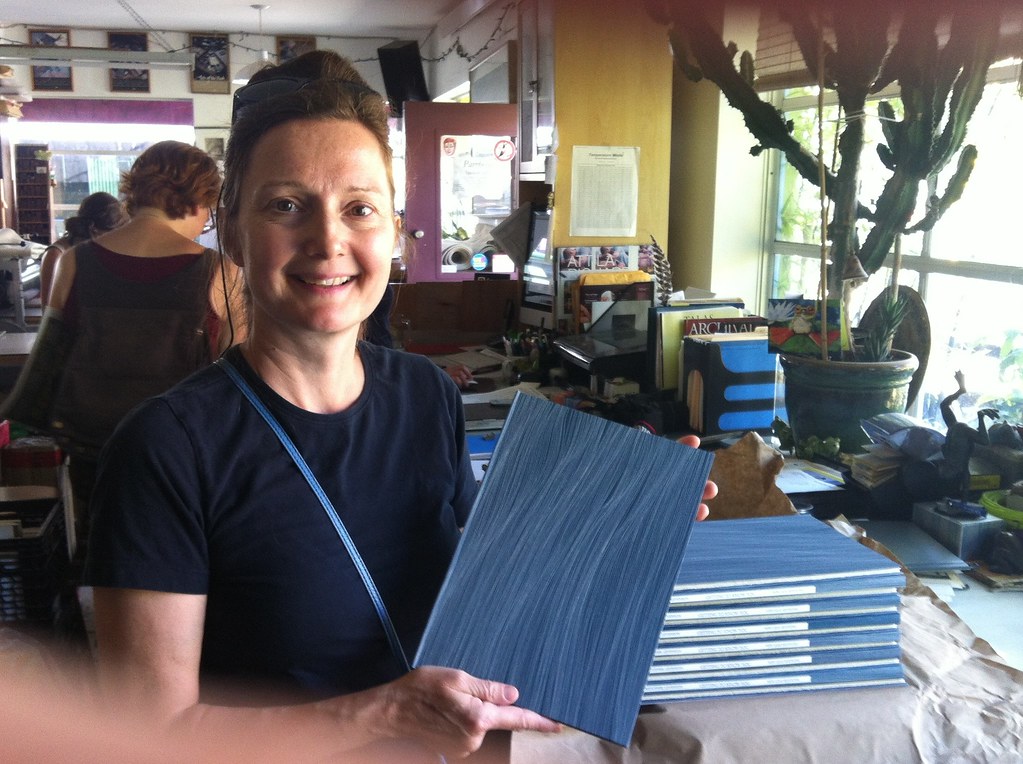 “By all means create” — video

Earlier this year, I was asked to participate in a video by Opus Art Supplies here in Vancouver. A number of artists were asked to illustrate a word each to make up a quote by Vincent Van Gogh — watch the video to learn what the quote is. I was thrilled to be assigned the word “draw”!

Thanks Opus, and a nice job was done on the video by Ryan Mund. He filmed me back in March, when it was chilly and rainy. I did an outdoor drawing near the Vancouver Convention Centre, squeezing in the filming before I headed off to Northern England. You can see me drawing away from 0:34-0:36.

Drawings from my spring visit to Northern England and Scotland to come soon.