Visiting the Berlin hamam for women 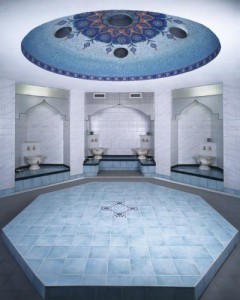 The hamam for women in Berlin

A hamam is a traditional Turkish bath. The one I have been planning to visit in Berlin is women-only and has been around since 1988. I made it there on December 6. It costs €14 for a 3-hour visit and it is self-serve unless you book a treatment as described below.

This hamam is a low-key casual place where women (and as I found out, on Thursdays they can bring children as well) can come to wash, sweat, relax and socialize. There are several resting rooms with large sofas, loungers and lots of pillows, a bar where you can buy food, juice, water or tea, and an inner courtyard where you can rest in the fresh air, or briefly cool off in the winter. I felt very comfortable here and decided I have to come back as often as possible while I’m in Berlin. I booked a treatment for €24 for next week (kese and sabunlama) to get an idea of how to do these myself in the future.

I have been to a hamam in Vancouver, the Miraj Hammam, a wonderful place, but you have to book a minimum treatment which ends up costing about $120. The self-serve European sauna or spa, where you are not required to book a treatment, but can use the sauna/steam/pool/hamam facilities for about 3 hours for around $20, simply does not exist in Canada.

This is a pestemal which is used as a coverup and towel in the hamam. I bought one for €10 for future use and as a unique souvenir.

Hamam culture arose over the millennia as a blend of Arabic and Mediterranean traditions. The word hammam means “to warm” in Arabic. Turkish bathing culture, which dates back to around 800 years, is an extension of the public baths once celebrated in ancient Greece and later expanded throughout the Roman Empire. The influence of Islam emphasized the social relevance of the hamam as a center of communication.

There is a certain order in which you typically do things in a hamam:
1. You start by washing yourself in a warm central room. There are sinks with hot and cold water around the perimeter of the room. Using a shallow engraved metal bowl called tas, you pour water over yourself.
2. Once warmed up, you then use a satin glove called kese to massage and peel your skin.
3. Then you wash yourself with soap called sabun, the soap massage itself is called sabunlama. Steps 2 and 3 can also be booked as a treatment.
4. You rest in the centre of the room, on the gobek tasi, a large heated stone area.
5. After this, you might do a sauna cycle or two, or rest in the lounge areas, outside, or book a massage or cosmetic treatment.

The end effect is that you feel extremely relaxed and content, as if you are glowing warmly from the inside, and also ready to fall into bed and sleep. Just remember to drink lots of water during and after the hamam visit to rehydrate.

The entrance to the hamam is up the stairs on the right. It is part of a women’s centre with various facilities, such as educational, consulting and fitness offerings. It’s also in a former chocolate factory, Schokofabrik, which is the perfect location for a women’s centre. 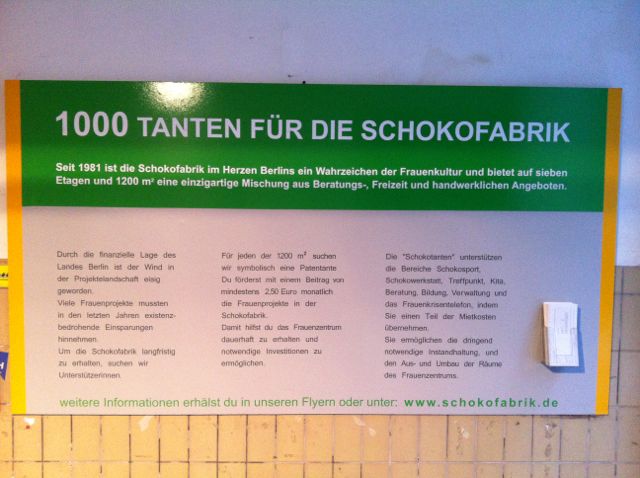 The Schokofabrik women’s centre is a great idea, but they are running out of funding and have started a campaign to find a “1,000 Aunties” to support them with a monthly donation. 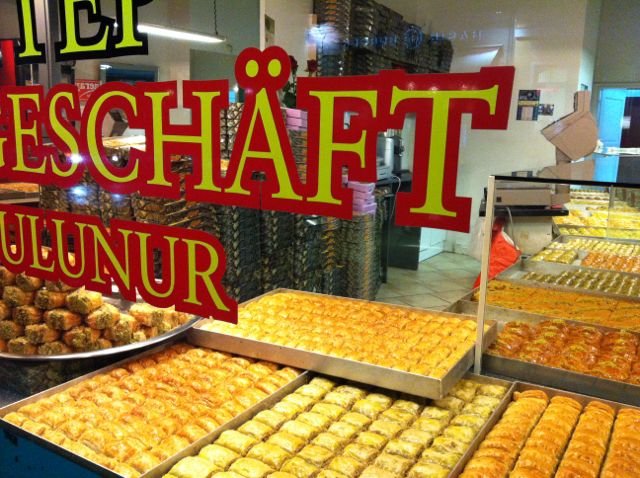 Turkish sweets. The hamam is located in the Kreuzberg district of Berlin, which has a large Turkish community and culture. I very much enjoyed walking around here and plan to come back and sample Turkish food, which is something we don’t really get in Vancouver.

Pan-Asian restaurant wall decor, Kreuzberg, Berlin. This was another restaurant I saw, and I just had to photograph the cool photographic art on the wall. In Vancouver, in a hole-in-the-wall place like this, you would not see this kind of sophisticated art. And if you did, people would complain about the nudity. It’s a shame, I think. How wonderful to see this kind of freedom here, to display something so beautiful and moving as an artistic portrayal of the human body. 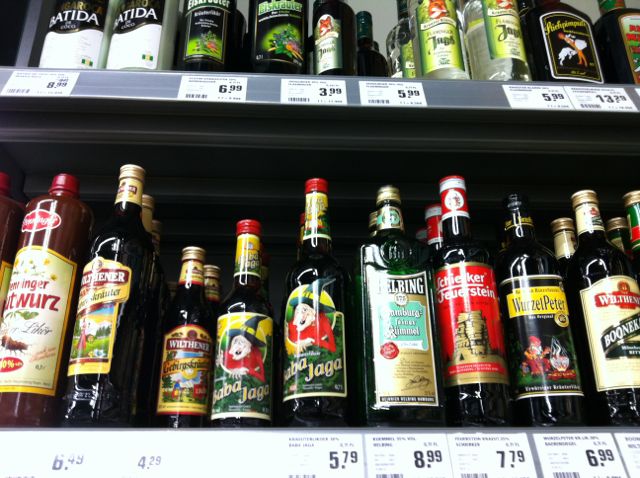 Germans like their herbal digestives. I was amazed by the variety of herbal liquors you can buy at the grocery store (besides any other kind of alcohol, of course).

My friend B. gave me this tiny moose Christmas pyramid, which is now adorning my window sill here in Berlin.

We now have snow and ice in Berlin. It’s pretty cold here for a Vancouverite like me: -4˚C high / -7˚C low.

I have a huge sweet tooth, it’s more of a tusk really. I bought my old faves, Prinzenrolle cookies, Milka chocolate, and Haribo gummies. You’d think this would last me a while, but it probably won’t. And don’t be fooled by the tomatoes in the background, I probably won’t even get to eating those.